John Vianney was born into a French peasant family in the village of Dardilly. At an early age he was attracted to the religious life, but did not have the necessary background and education. After much discouragement from family, friends and clergy, he nonetheless began his studies for the priesthood and found them extremely difficult and almost impossible.  He still persevered in studying and prayed constantly for divine assistance. After years of hard work and much determination he was finally ordained a priest.

He became most renowned for his personal holiness and his marvelous work in the confessional. The conversion of thousands of hardened sinners is attributed to the Cure d’Ars.  In spite of numerous obstacles and temptations, he always remained true to his vocation, which became a source of inspiration to all who knew him. More exhausted from his unceasing labor than from old age, he died in 1859.  In 1900 Pope Pius XI canonized John Vianney and proclaimed him the patron of all diocesan priests.

We, who have him as the patron of our school, can learn much from his example of faith, dedication, determination and selflessness.  We should pray that those qualities, which won heaven for him, might also become a part of us. 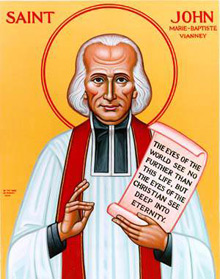