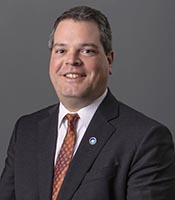 George joined OceanFirst Bank in 2013 as Senior Vice President/Commercial Lending Team Leader. In his current role, George manages all customer-facing initiatives including commercial lending, retail banking, government banking, wealth management, and cash management for the areas including Mercer, Monmouth, Middlesex, and Ocean Counties in NJ, as well as Bucks County and Philadelphia in PA. George has more than 25 years of banking experience. Previously, George was with TD Bank and its predecessor, Commerce Bank. In addition to earning a Bachelor of Science degree in Business Administration from Monmouth University, George graduated from the American Bankers Association Stonier Graduate School of Banking, which includes the University of Pennsylvania Wharton School of Business Leadership. George volunteers his time by serving as past chair of the Executive Board of the United Way of Monmouth and Ocean Counties, the Business Council of Monmouth University, and the Children’s Specialized Hospital Foundation Board of Trustees.